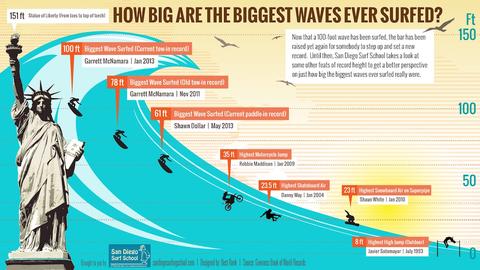 HOW BIG WAS THE BIGGEST WAVE EVER SURFED?
As of January 2013, Garrett McNamara, has surfed the biggest wave ever recorded surfed at 100 feet!

Now that a 100-foot wave has been surfed, the bar has been raised yet again for somebody to step up and set a new record. Until then, we take a look at some other feats of record height to get a better perspective on just how big the biggest waves ever surfed really were: