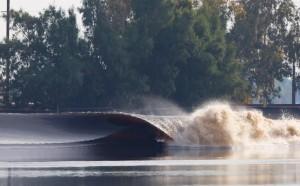 The World is Flat and the Surf is Pumping

Surfing is undoubtedly a global sport. Over the last 40 years, it has grown well beyond the borders of the original incubators of surf culture, Australia, California, and Hawaii.  If you don’t agree, reference our current and prior World Champions.  Brazil has become a dominant force in professional surfing.  Adriano DeSouza’s title last week served as an exclamation point in the competitive script played out by him, Felipe Toledo, and Gabriel Medina over the last two years.  The world of surfing is changing.  The platform that inspires new talents across the globe is the same one that can facilitate their importance to the rest of the world. Today’s rapid-fire exchange of information online not only develops this growth but allows us to see just how far and how fast it can occur.  Skim boarders from Florida (look up Brad Domke) have caught 20 foot bombs in Mexico, California boys have lined up with glaciers in the arctic, and we have been able to witness all of this through 2 minute segments on the web.  This globalization of our beloved sport has occurred quickly and without limits. Well, relatively without limits, the ocean is usually one of few required ingredients, until you see this.. Kelly Slater and his team of scientists/engineers/magicians have created a perfect, rippable, barreling wave that can be churned out one after the other without a drop of water out of place.  And while competitors like the Wavegarden and Surf Snowdonia in the UK have already realized the dream of creating fun, surfable waves, KS Wave Co. has changed everything by making it larger than life.  The wave of our dreams can now be created, and recreated, over and over again.  Major inland cities can now have their own mini Kirra, that pumps year round, where localism comes with a price, literally. So what does this mean to the world of surfing? Will we see Ohio or Poland’s first ASP World Champion? Probably not anytime soon.  It does mean, however, that surfing has taken a leap in accessibility.  A sport that is already seeing rapid growth along the world’s coasts, just became an option potentially anywhere.  Yes, lineups will continue to get more crowded, but it sure will be exciting to see whats possible as more and more people and cultures contribute to surfing’s collective history.